I just had a look at the new Google My Location service launched this week. Being a Location expert, I have been looking closely to see how well it works.  On first pass, it is quite similar to the Psiloc Locatik service launched at the Symbian Smartphone show in London in October.

The raw inputs to the service appears to be network cell-ID (a unique identifier) and like the Locatik service, they will rely on those of us who actually do have a GPS enabled phone to help populate the Google “base station almanac”.

To provide an assessment of the service, I tried the following on my Nokia 6110 navigator which has GPS in downtown London (an area with lots of cellular base stations).

– Came out of a tube station and asked google maps (version 2.0.3) where I was
– GMM said “we don’t know where you are”
– I turned on the GPS and acquired a fix
– I then asked GMM where I was, and it showed me exactly on the map where I was (as expected)
– I then turned off the use of GPS in GMM (via a menu item) and asked again where I was
– The dot stayed on the map at the same location (as expected)
– I then walked 200m along the road (central London – Piccadilly) and asked GMM where I was
– The dot on the screen showed me at the last position
– I then repeated the steps above to turn on the GPS and tell Google where I actually was

This is the same way that the Locatik system works – it uses user generated content (trusted GPS location information from GPS enabled handsets) to seed a database.  Those people who have GPS turned on will send the GPS co-ordinates to the Google server, and at the same time the cell-ID received from the phone on my network (Vodafone) will also be sent.  Over time, the GPS enabled phones will also report back the cell-ID’s received on all networks – so Google create a master database of the approximate location of all cell towers, logged against GPS.

The next time someone on the same network as myself walks in the same area where I have seeded the Google database (hey Google should pay me for all the data collection I am doing on their behalf), and they have a phone that does not have GPS, Google will return an approximate location via the GMM application – sounds simple! However, approximately 97% of phones in the UK do NOT have GPS. 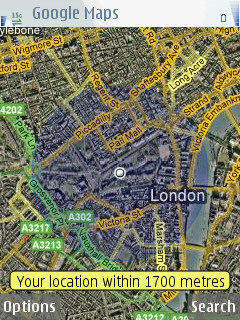 I tried this by going into my office in central London and asking GMM where I was.  The screenshot at the left shows a large circle centred around my actual location. This means that it has some of the cell-ID information (probably from me and my last GPS fix) and some it doesn’t have so it plots a large circle.  This accuracy is about the same as the Locatik service – around 1700 metres.

Positive things about Google My Location

– User generated GPS information is free – the more people with GPS phones, the better Google’s database
– The data generated is global – anyone in any country with a mobile network can help Google populate their base station almanac

– The data collection will take a long time, and must be done across all networks (5 in the UK) to be useful for all subscribers
– Mobile operators change the cell-ID information on an almost daily basis – so the time between this information being detected as having been changed and the database being updated could be quite slow – this will over time lead to large errors in the location estimation
– Initially, the database will be small – and so many searches will say “your location is not available”.  As with all beta software, this is ok for a while but users will expect that their location is available on their non-GPS phone
– The raw input is still just Cell-ID (and only one cell at a time) so the accuracy will always be hundreds and hundreds of metres (most probably kilometres in urban and rural areas) – the question is will users accept such poor accuracy on non-GPS phones

Other companies that use the base station almanac approach include Skyhook Wireless who are using a raw input of WiFi base station identifiers (SSID) in a similar way to Google to map a database for users with WiFi enabled phones – so this approach is not new.

The solution
The company I work for, Seeker Wireless are pioneers in location and have a much more robust approach to non-GPS location using the handset.  We work directly with the mobile operators to provide us the base station almanac information (and any overnight changes) to provide a much more accurate solution.  Patent pending algorithms do much more than the GMM application to more accurately locate users to within a few hundred metres.

The issue of accuracy will dominate the mobile location landscape in the coming months and years, and just because you have a huge database of user generated content (with a slow feedback loop to fix errors as operators update their network and add cell-sites etc) doesn’t mean you have an accurate and reliable non-GPS location solution.

I’ll be watching this space closely in the coming months to see if the accuracy improves as more users with GPS phones try the service.  Whoever wins in this space will also win in the mobile advertising space, as the user’s location is the one missing piece of information while mobile, and with this the context of the interaction can change dramatically (think if an advertiser knows where I am, they can change the ad I see). This is where the incremental revenue might come from in the mobile advertising space.