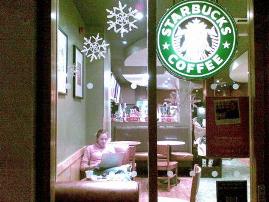 The picture on the left (taken late December 2007) shows a more common sight than a few years ago.  I have been using WiFi in Starbucks and other coffee shops for nearly 8 years now, and for I think the last 6 years I was predictably the only person on a laptop (connected to WiFi) in the coffee shop.  These pictures were taken on a Sunday evening just before the end of 2007.

In mid 2006, at a Starbucks on Gloucester Road in Kensington, near central London I came across my first WiFi buddy!  We both exchanged business cards and remarked how we had never met anyone else on a laptop at a hotspot before, and we were very frequent users. 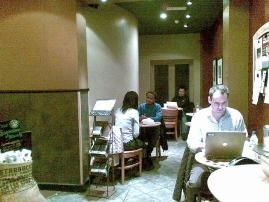 Over the last 2 years I have been watching the use of WiFi in my local coffee shops quite closely.  I am probably the most regular customer of my local Starbucks (they know me by name and get my drink ready when I enter the shop…), and only during 2007 were there enough people typing on laptops in this store at the same time to warrant a picture to prove my point.

When I meet the occasional American business traveller or tourist looking to connect their laptop to the Starbucks WiFi hotspot (powered by T-mobile)  they are shocked initially that the service is not free (as it is in many parts of America, and hotels and coffee shops in Europe) AND that the casual rate for WiFi access can be as much as £5/hour, £10 for 24 hour access or up to £40 for 30 days access.  See a summary of links to prices at the end of this article.

If you subscribe to a hotspot plan, then access is more like £10 for a month of unlimited usage.  The WiFi hotspot owners must have choked on their Starbucks muffin when 3 launched their latest mobile broadband campaign where for £99 you get a “dongle” (USB data modem) and mobile broadband access for as low as £10/month with 1GB included.

Their most expensive tariff is £25/month which gets you 7GB compared to Vodafone and T-Mobile’s 3GB for between £20 – £30 depending on the operator.

Interestingly, Vodafone and T-mobile improved their mobile broadband tariffs in mid 2007 from approximately £50/month for just 300MB of data to the plans mentioned above to compete directly with the WiFi hotspot model. Note that Vodafone is still the more expensive compared with 3 and t-mobile, but we should expect to see plans closer to those offered by 3 before the end of 2008.

At these prices, and considering that the 3G mobile broadband speeds are at least 1.4MB/sec and in some places on some networks with the right HSDPA modem you can get 7.2MB/s, mobile broadband poses a serious threat to the WiFi hotspot model.  The argument is that armed with a mobile broadband “dongle” or laptop data card, any shop, office, library etc becomes a WiFi hotspot.

I would expect that the sharper pricing from the mobile operators has been designed to attack the WiFi market head on and capitalize on the consumer’s love of the internet, and the need to remain connected when outside the office or home.

I can fully understand why someone such as myself would lug a laptop, mouse and power supply to a Starbucks to get some piece and quiet and do some work, but peering over the shoulders of my new found WiFi café buddies suggests that internet access “out of home” is becoming more widespread.

I am even starting to see dongles appearing in cafes and shops that have a public (paid) WiFi hotspot.  Will 2008 be the year of the dongle?  Expect to see many more dongles hanging from laptops in coffee shops this year.

Update 2: Bill Thompson writes on the Technology section of the BBC website on Finding the freedom to roam – broadly agreeing with the points I raised here.

Update 3: My perseverence has finally paid off and I managed to snap a picture (with permission) of a guy in Starbucks in central London using a 3G dongle where WiFi was also available.

Andrew has been invited to present the Keynote address at the 2020 Europatat Congress in Brussels. on the topic “A new age for potatoes”. Europatat is the European Potato Trade Association, based in Brussels, Belgium.
View Calendar
Connect with Andrew
Recent Podcast Episodes
Download
Share on facebook twitter linkedin email
S2 Episode 4: The Future of 5G with Paul Scanlan CTO Huawei Carrier Business Group