Amazingly I have held this post in draft for over 12 months (I have been busy working with blue-chip clients in social media and running after a 4 year old).  I was prompted to take it out of draft and publish it as a result of a BBC story I read today: 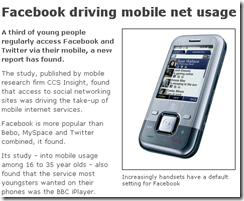 The BBC story quoted research from CCS Insight that found that access to social networking sites was driving the take-up of mobile internet services.

Its study – into mobile usage among 16 to 35 year olds – also found that the service most youngsters wanted on their phones was the BBC iPlayer.

I thought I would leave the rest of my post (originally authored at the end of September 2009) so you can contrast thinking from over a ago with today – such is the benefit of hindsight but a lot of it is still quite relevant.

You can’t help noticing how fast social networks are growing around the world, and with the two that get the most press lately – Facebook and Twitter, the real question is what does the explosion of social networks mean for mobile?

With twitter it used to be “What are you doing?” but with the explosion of mobile services, it has rapidly become “What are you doing and where are you doing it?”. Even Facebook has changed their status update window to “what’s on your mind”, and the Facebook iPhone application remains one of the most popular free apps in the Apple app store.

So how can social media help to drive the adoption of new mobile services?

Jumping from the desktop to the mobile

If you don’t believe that social networking growth is exploding – consider these statistics.  The internet took four years to reach 50 million people and in less than nine months, Facebook added 100 million users.  Also, if YouTube were a country, it would be the third most populated in the world.

Alan Moore in a recent whitepaper written for Microsoft titled “The glittering allure of the mobile society” mentioned  the 6 unique benefits of mobile.

With users flocking to these social networking websites, the next logical step is for them to want to take these networks with them – and allow them to contribute to their status updates at the “point of creative impulse”.

The one major barrier that I see in this plan is that while the “mobile internet” is freely available on all UK networks, many consumers are unsure of the costs, and so are not seeing mobile social networking as a key activity for them on their mobile.  Indeed, a recent infamous Morgan Stanley report written by a 15 year old stated “teenagers don’t twitter”.

His real explanation was however that to twitter via SMS eats into their monthly message allowance.  Some operators have zero rated tweets to a special short code, but the issue remains that social networking access via mobile is still seen as expensive and so consumers are using the PC at work and home instead of their mobile at the moment.

At a recent mobile conference in London, I conducted a simple experiment.  While chairing a session in front of 100 mobile executives, I asked one of the event organisers, a young lady called Rachel about how she uses her mobile.

She told the hushed audience that she did not access social networking on her mobile as she was “not sure of the cost”.  When told that with her mobile operator’s standard plans she had reasonably priced access to the internet and hence mobile internet services, she seemed unconvinced that this would not eat into her monthly pre-paid balance.

Indeed, when was the last time you said to someone “I can’t talk for long, I’m on the mobile”.  I can remember saying this phrase, probably 7 years ago, but with mobile competition in the UK now at a peak, almost everything is going flat-rate.

Voice calls and texts are being offered in the 1000’s per month but it seems like mobile internet is yet to go flat-rate, or the perception of consumers is that it is too expensive.

However, this will remain a “closed” network (Orange to Orange) and just as when SMS messages were limited to those on the same network, adoption of these services will be slow.

In contrast, I remember the day in Australia when all the major networks opened up the ability to send SMS messages to friends on other networks.  I was working for Telstra at the time, and overnight, message volumes went from 80 million per day to 800 million per day!  This proves that people like to talk and communicate across any network.

Recently, Vodafone unveiled their new social networking initiative called Vodafone 360 and this a move in the right direction to promote a completely open network to all mobile users. With Vodafone 360, they have designed both a web based solution as well as a mobile client that glues together address books, contacts, location and social networks in the one place.

With Vodafone behind this initiative, and directly driving their customers onto mobile social networking, this will hopefully serve as a catalyst for other operators to reduce the high cost perceptions of the mobile internet, and encourage users to take up where they left off when they close down their PC at home or work and go mobile.

My view is that if mobile operators get this right, consumers will flock not only to mobile social networking, but also to mobile internet services generally as they discover that they can get access to almost anything while mobile.

The challenge for the mobile industry will then be to package existing information sources in a mobile friendly way – and delight instead of frustrate new mobile internet users.