This week has been a big week for the iPad.  Not only did Steve Jobs launch the iPad2 on March 2nd, there has been a lot of discussion in the UK about iPadvertising as well as how iPad publishers are being treated by Apple. Image credit: Reuters.

I first used the term “iPadvertising” on my guest blog post over at Econsultancy, and also covered this topic on a post titled “mobile advertisings’ success lies on the second screen not the main screen”.

The iPad has been a hot topic from the folks at New Media Age with a story titled “iPad ad model isn’t leaping out for bands”. 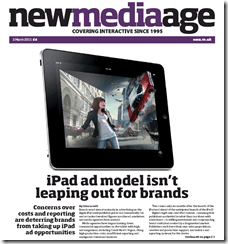 Other iPad discussions this week centred on Apple’s demand that publishers share 30% of publishing app revenue.

Indeed we may even see alongside the launch of the iPad2 the re-launch of iAd2, apple’s mobile advertising business built with the acquisition of Quattro Wireless.

So – let me provide my perspective on these 3 areas

1. iPad 2 launch. No I won’t be buying one to replace my current iPad.  I’ll wait until the iPad3 arrives just before Christmas.

Only after 4 revisions of the iPhone did they get it right in terms of data speeds (HSDPA), decent camera (5MP), and a decent screen (retina).

Although a lighter and thinner iPad2 is tempting, a camera that has (<1MP) and poorer resolution than my E61i that is now 4 years old is not that appealing.

The photos of my now 4 year old I took with that camera were rubbish (and it was a 2MP camera).  I’d never let another child again be photographed in anything less than 5MP phone camera resolution.  When she is older he will tease me that her first few years were documented on a blurry camera phone.

2. Brands and the iPad. The major point of the NMA article mentioned above is that Brands won’t invest seriously in advertising on the Apple iPad until publisher prices are dramatically cut and accurate download figures are shared.

This is a key point – but again just shows that this new channel is still is it’s very nascent stages and we’re all working out how best to use it.

All these issues will get fixed, just not straight away.  At least with iPadvertising embedded in iPad publications we don’t have to directly involve mobile operators as we have to with mobile operators, hence reducing the impedance effect of mobile advertising.

Apple’s initial thoughts with their iAd offering was that large TV budgets would simply be diverted to fund the $1M (now 50% off) minimum campaign spends required on the iAd platform.

This clearly has not happened, and makes me think that possibly Apple does not really understand the advertising (or publishing ) value chain.

Having to massively discount (and at $500K it’s still 5 x too expensive) what they clearly see as a premium product means they don’t really appreciate all the parts that go together when advertising on the mobile/tablet.

Brands such as Toyota, Ford, Land Rover and Virgin have started to experiment with iPadvertising, and the initial examples are encouraging.

As I mentioned in my post second screen not the main screen the iPad will be successful as an advertising medium because, unlike the mobile phone, it is not used as the main communications device.

Ads on the iPad are not interrupting the main use of the device (if you are consuming a magazine on an iPad it is not unexpected to see an ad every few pages) and also with a larger screen, the opportunities for richer creative have never been better.

What brands expect from all of their media are accurate figures to allow them to justify their media spend.

While traditional media such as TV, Radio and Outdoor will never be able to completely measure an audience (2,600 people meters determine TV ratings in the UK for 60 million people), digital channels have the promise (but do not yet properly deliver) to deliver highly accurate insights.

What appears to  be happening at the moment in the iPad publishing world is that minimal analytics are being provided.

Metrics such as swipes, taps, interactions and dwell time will continue to be important for advertisers especially on tablet devices, to allow them to justify the significant media spends on this channel.

Seven publishing, responsible for the Virgin Project monthly iPad magazine claim that they are the only ones able to provide this, but clearly they won’t be on their own for long.

I think into the 2nd half of 2011, we will see more agencies realise the power of the tablet as a marketing and advertising channel and there will be competing offers, as the iPad will become a “no brainer” channel as part of an integrated campaign involving TV-Radio-Outdoor-Web-Mobile-iPad-Social (there I said them all at once – feels good and is the way we should be talking about advertising!).

Forrester are predicting that the iPad2 will take Apple’s share of the tablet market to 80% – meaning that for advertisers, the iPad platform will still be an important one until the other manufacturers can catch up, probably not until well into 2012.

This brings me to point 3 and the fact that Apple us demanding a 30% revenue share from publishers with apps on the iTunes Store.

3. Apple wants 30% revenue share from publishers. This issue will be a hot topic now that Apple has an incredible lead in the tablet market, and publishers are seeing that they need to offer a tablet version.

Apple’s official stance on this is:

Which I can accept if you are talking about an application developer that has no distribution costs and no or very minimal marketing costs.

If however you are the Financial Times, or the Wall Street Journal, you already have some pretty significant sunk costs in your content, printing and distribution costs.

Slicing 30% off the cost of one of your digital subscription channels is not in Apple’s interests.

This is exactly why I bought an iPad (read my full reasons here).  By limiting the margins available, publishers may move to other platforms.

While I admire the simplicity of Steve’s explanation above of the 30/70 vs 0/100 splits, who (and how) do you decide when “Apple brings a new subscriber to the app”.

How about this real world scenario.  I go to the FT.com website (I am an existing subscriber) and hear that I can also get the FT iPad app, I MUST go to the App store to get the app (walled garden anyone?) .

If I sign up via the app as a result of my relationship with the FT and not Apple, who gets the credit?

At the moment the FT iPad app is free (you get 10 articles without subscribing), but if you sign up via the app, as a result of all the efforts of the FT to get you to go to the app store, download the app etc then does Apple get 30% of the monthly fee for essentially just hosting the app?

Perhaps I am missing something here,  but I think the rules are vague, and I believe they are deliberately vague so when Apple change them (and they will) they don’t have to explain anything, just say they are making the policy clearer.

According to Macrumors, Steve Jobs responded to a developer tying to clarify Apple’s position with a 1 line response.

We created subscriptions for publishing apps, not SaaS apps.

This smacks to me of the original stance from mobile operators around premium rate SMS (PRSMS), when initially over 50% of all revenue was kept by the operator for delivering what was essentially a 1p transaction with a bit of billing settlement on top.

As a result, I don’t see a lot of people (operators included) making much money out of PRSMS any more.

The larger the publisher, I would argue that it is possibly their efforts that bring the subscriber to the app store (and hence see the lolly shop of apps and make Apple lots of money) not the other way around.

If you are a small app developer or publisher, then I fully agree that the app store brings you customers en masse.

Do you agree/disagree? Feel free to leave a comment below, I really value your view on this.

The fact that no-one really understands the Apple policy makes me think that it is an initial land grab and as the industry develops things will settle down, otherwise we may see a big battle ahead between publishers (whom Apple needs to promote their products either directly or through reviews) and Mr Jobs.

So, a big week for the iPad and the industry being built around it – exciting times ahead. Watch this space.