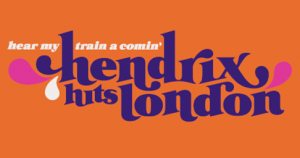 Summer 2012 sees the arrival of a magical new exhibition in London, to celebrate what would have been Jimi Hendrix’s 70th birthday. Hear My Train a Comin’: Hendrix Hits London, presented by Seattle’s EMP Museum, will run at in The Hospital Club’s iconic gallery space from 27 July – 31 August 2012.

Hear My Train a Comin’: Hendrix Hits London focuses on Hendrix’s quick rise to prominence in the London music scene, from his arrival in the UK on September 24, 1966 to his brief return to America to play at the Monterey International Pop Festival on June 18, 1967. In less than nine months, Hendrix had transitioned from unknown guitar-slinger to darling of the British music press, and was poised on the edge of superstardom.

The exhibition will include over 100 artifacts, some of which have never been exhibited before. They include such gems as Jimi’s original blues records, photographs, fan letters, as well as iconic items of his clothing such as his “Westerner” hat (which he wore frequently in 1967 – 1968 and is wearing on the cover of his 1968 Smash Hits album). Further exhibition videos will incorporate many oral history interviews with myriad musicians and people related to Hendrix’s story, such as Jeff Beck, George Clinton, Bootsy Collins, Iggy Pop, Al Hendrix, Charles Shaar Murray, Ravi Shankar and Joey Ramone. 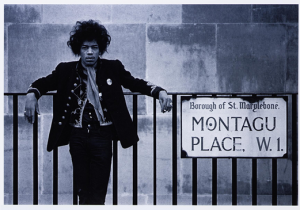 The exhibit comes through collaboration of two projects from philanthropist and investor Paul G. Allen. EMP was founded by Allen, the Microsoft co-founder, in his hometown of Seattle in 2000. It is an exclaimed, interactive museum of music, pop culture and science fiction. Allen opened The Hospital Club in 2002 as a new professional and social hub for people working in the creative arts.

By blending interpretative, interactive exhibitions with cutting-edge technology, the EMP Museum captures and reflects the essence of rock ‘n’ roll and popular culture. Hear My Train A Comin’: Hendrix Hits London is curated by Jacob McMurray who also developed Jimi Hendrix: An Evolution of Sound and Nirvana: Taking Punk to the Masses, both currently featured at EMP. Jacob says, “Hendrix’s time in London was pivotal to his career, and now we have this unique opportunity to tell the story in a way that’s never been done before, introducing artifacts that will be shown to the world for the very first time.”

Sue Walter, CEO of The Hospital Club, says, “We are thrilled to be hosting Hendrix Hits London for Jimi’s 70th birthday, during what promises to be an exceptional summer in London. At the Hospital Club we pride ourselves on being at the cutting edge of the creative industries and a nexus between art and music; I know that this unique exhibition will entertain, inspire and stimulate all who come to see it!”

ABOUT THE HOSPITAL CLUB
The Hospital Club, the only members’ club in London specifically designed for the creative industries, celebrated its seventh birthday in November 2011. Since its inception in 2004, the Club has provided a space for its members to come together in its beautiful building in the heart of Covent Garden to connect, create and collaborate, and has welcomed a host of stellar productions to the Hospital Club Gallery including Annie Liebovitz’s American Music, Warhol vs. Banksy and EMP Museum’s history of hip-hop, Yes Yes Y’All.

ABOUT EMP MUSEUM
EMP is a nonprofit organization dedicated to the exploration of creativity and innovation in music, science fiction, and popular culture. EMP combines interpretative, interactive exhibitions with state-of-the-art technologies, and educational programming to offer visitors of all ages a first-hand, multi-dimensional experience of the creative and artistic process. EMP owns the largest collection of Jimi Hendrix memorabilia in the world with more than 5,000 artifacts. The museum has organized several exhibitions including Jimi Hendrix, Message to Love, and Jimi Hendrix: An Evolution of Sound.

EMP is housed in a 140,000 square foot Frank O. Gehry designed building. This spectacular, prominently visible structure has the presence of a monumental sculpture set against the backdrop of the Seattle Center. For more information, visit EMPmuseum.org.