What happens when you invite influential bloggers to @Wimbledon? Published 2015

When I was at IBM, I invited key social media influencers to Wimbledon to tour the IBM behind-the-scenes operations.

As many people know, since 1990, IBM has been the Technology Partner for Wimbledon, and as part of this we show our key clients behind-the-scenes to showcase the power of an IBM supplied end-to-end solution with the scale of Wimbledon.

In 2014, David Terrar was one such blogger, and he delivered a very positive view of our operations. You can read more here.

While both of these Gentlemen are not IBM clients, they have a whole other level of influence amongst some of our key markets.

Neville is a formidable blogger and for more than 10 years has run the FIR podcast. Frankly, when Neville talks, people listen. He is one of the most respected voices in the digital and social world and it was a huge coup to get him down to Wimbledon.

His blog post is fantastic, and his huge readership will now see the magic IBM delivers at Wimbledon, and we get access to a whole new audience.

You can see the headline of his blog post below, and read it in full at social.bz/jangles 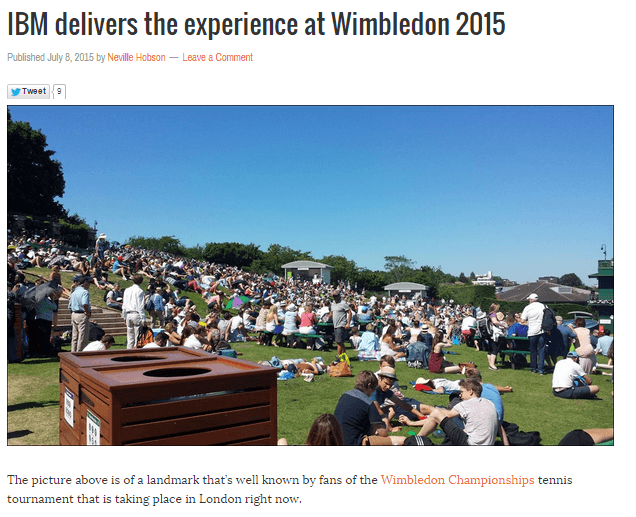 Equally socially eminent is Alan Patrick. He has an audience of over 500,000 per month on his Broadsight blog. and he is also well respected and trusted in the world of social business and social data. His blog post looks at the data aspects of Wimbledon and delivers high praise for Watson.

You can read his blog in full at social.bz/freecloud 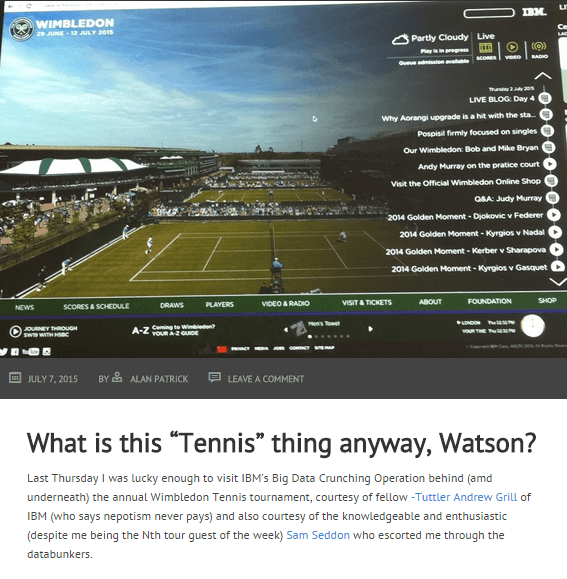 The great news is that both Neville and Alan were blown away by the data rooms, Watson and especially interested in what we are doing in the social area.

I must give a huge thanks to Sam Seddon, IBM Wimbledon Client Executive for once again believing in the strategy to host influential bloggers. Also huge thanks to Chris Thomas,  Tighe Wall, and Sarah Fardon from IBM and Helen Weal from the AELTC who showed us the social command centre, and data scoring boxes.

Access to these behind-the-scenes aspects of our involvement at Wimbledon was invaluable in ensuring the best possible coverage in their posts, and it shows!

How are you using key influencers like Neville and Alan in showing off the unique parts of your business to a whole new audience?