The urgent need for Digital Diversity on today’s boards

A version of this post first appeared on the ANZ BlueNotes blog, titled “How to get digital in your company’s DNA” on 17th August 2015. It has been updated and expanded below. 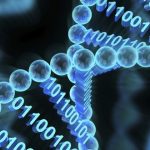 Ask yourself this question – is digital in your company’s DNA? If the answer is ‘no’ or even ‘not really’ then this post is for you.

The issue of digital literacy on boards is something I have been passionate about since the turn of this century. Some 15 years ago, I delivered an impassioned plea to a lunchtime audience of mostly senior executives at the Rotary Club of Sydney to take the issue of “e-commerce” seriously.

The talk explored how to find themselves digital mentors who could help “navigate them through the e-commerce minefield”.

Fast forward to 2016, and we no longer talk about “e-commerce” (it is simply commerce). However, the issue of digital literacy remains, in my opinion, a much more important issue than it was back in 2001.

In 2016, it has the ability to affect the stock prices of publicly listed companies in the short to medium term if left unchecked.

In my position with IBM, I am fortunate to travel the world and speak to the most senior of our clients about social business, digital transformation and enterprise collaboration.

I see firsthand how companies are struggling to ensure the C-Suite can quickly grasp the impact of digital disruption being felt across all industries. Digital disruption is not just around the corner, in many industries, it is already here.

One good example of digital disruption in the banking industry is the Polish bank mBank. It was started in 2000 as a direct bank by its parent BRE Bank, and so successful was the model, that in 2013, mBank became the bank’s main brand.

There have been many examples of major banks starting small, agile digital outfits to address the impacts of digital disruption. The mBank example is interesting in that BRE decided that they would disrupt themselves, rather than being disrupted.

In late 2015, IBM’s Institute for Business Value released their Global banking study that looks at the impacts of digital disruption and the opportunities for banks to respond and benefit from this.

The study supports my view the leading global banks that respond and adapt to the onset of digital disruption will outperform their peers by a considerable margin, while also delighting customers, reducing costs, and improving operational efficiencies.

SO WHY IS DIGITAL DISRUPTION SUCH A BIG DEAL?

Recent research revealed by MIT’s Center for Information Systems Research puts the threat of digital disruption in stark business context. According to the study, board directors estimate that 32 per cent of revenue is at risk over the next five years due to digital disruption.

At a recent MIT Sloan CIO Symposium Jennifer Banner, a board member of the Federal Reserve Bank of Atlanta said that digital disruption is one of the “squeaky wheels” in corporate boardrooms.

What concerned me back in 2001 still concerns me today. Fifteen years on many of the boards of listed companies don’t have the digital leadership they need.

In London, where I have lived for the last ten years, the same problem exists. A 2014 study by Korn Ferry showed that only 1.8 per cent of FTSE 100 companies had board members that could honestly call themselves “digital”, so clearly this is a global problem, not just restricted to a particular region. 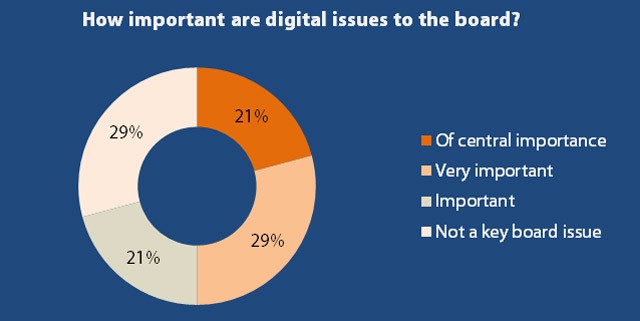 This issue can be fixed quite easily. As we have seen with Australian corporates Qantas and Fairfax appointing Ad-man Todd Sampson to their boards having a different perspective can help companies see differently, identify new opportunities and keep ahead of the digital curve.

Back in 2001 when I delivered my impassioned speech in Sydney, no one seemed to take any notice. I received warm applause and knowing nods, but perhaps I was too young or too naïve to think business leaders at the time would or could take the threat of digital disruption seriously.

THE RISE OF THE DIGITAL DISRUPTOR

Over the last few years, there have been a number of high-profile digital disruptors. I have highlighted just a few below:

WHAT ARE THE CHARACTERISTICS OF TODAY’S DIGITAL DISRUPTORS?

Spotify and their competitors are massively disrupting the record industry model. Their model still hasn’t been proven, and even artists like Taylor Swift continue to boycott the site, but consumers are moving to always on, always available music.

The future of video is of course with companies such as Netflix, who have just launched their service in Australia. Almost overnight, Australia’s internet bandwidth doubled as a direct result of the Netflix launch. Senior executives in any industry cannot afford to ignore the signs.

These nimble start-ups don’t have the legacies that many listed companies have and the reason they can outmanoeuvre older, more established companies is because digital is in their DNA, providing them with the ability to leapfrog technological advances.

Which board wants to be the one that was disrupted by the next Uber?

LEARNING THE LANGUAGE OF DIGITAL

Across the board, I still see senior executives and board members that are struggling to keep up with the effects of digital disruption. In some ways,this is linked to their ability to become fluent in the new language of digital.

I’ve heard of so many boards that have travelled to the west coast of America, met with the folks from Google, Facebook and Twitter, and returned home full of energy to “go digital” … until the next board meeting where something more mundane requires their immediate attention.

This is not something that can be fixed overnight and it is far more complex than placing the nearest millennial in front of them to explain what all this social and digital jargon actually means.

Importantly, the skills required to operate digitally in the C-Suite cannot be imparted in a simple training course.

My view is the unstoppable impact of digital disruption it can only be properly conveyed by someone who:

People who have these characteristics can be found as non-executive directors (NEDs) sitting on boards across multiple industries around the world.

They don’t provide infrequent advice or come in for an inspirational session then leave. Instead, they ensure the business is seen through a digital lens at each and every board meeting.

DIGITAL LITERACY HAS BECOME A PASSION

I first spoke about the need for digital literacy in my second TEDx in February 2015 at KPMG in London, and again in a keynote at the Northern Ireland Chamber of Commerce Spring Networking Conference event on 28th April 2015. You can watch a replay of the NICC event below.

So where can digital NEDs be the most effective? To work this out, I turned to a report by Deloitte Australia from 2012 entitled “Digital disruption, short fuse, big bang”.

In the report, Deloitte looks at industries very likely to be disrupted by digital and identify industries at risk of a ‘short fuse, big bang’.

Companies most at risk of being disrupted, such as those in finance, professional services and retail, need to be looking for digital NEDs right now.

A digital NED is also unique in that they are young enough to have been playing with digital all their life, and experienced to be able to operate at board level as a senior executive. They sit in this unique sweet spot. 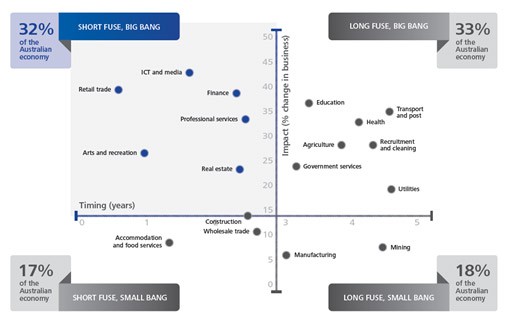 At a 2015 event in London featuring Roger Parry (a veteran of the advertising industry who is now the chair on several boards), I was able to ask him about the need for Digital NEDs on boards. He argued (and I agree) that you actually need TWO Digitally savvy NEDs. If you have only one, then they become the “digital dude”. Once you have two, they can work in tandem to have their voices heard and ensure all company business at the board level is conducted through a digital lens.

DIGITAL DISRUPTION IS HERE – YOU NEED TO ACT NOW

Digital disruption should not be seen as a threat; it should be embraced as an opportunity to transform your company.

The need for digital diversity is something I covered at a recent business networking event hosted by YFM Equity Partners in London.
Watch a replay of my presentation below.